I was originally hoping to launch my shop within the next week, but realized it's something I shouldn't rush in to- so now I have a few more weeks to take my time and keep creating.  Best to make sure I'm 100% ready, right?

Be on the lookout for some SNEAK PEEKS right here on my blog between now and then!

I saw something come up in one of the craft blogs I read that I just had to have: an antique printer tray upcycled into an awesome jewelry display. I thought about going onto Etsy to purchase one but inspiration struck and I made the decision to tackle the project with my own two hands.

Printer trays were used between 1890-1960 to hold the various pieces of an alphabet set. Let me share a fun fact I learned during my internet research: these trays were organized in font families and stored in vertical racks- which is where the terms "upper case" and "lower case" came from. You can thank me when this question comes up at your local bar's trivia night.

The "BEFORE"
My first stop was eBay, where I fired up my bidding skills and landed myself an antique printer tray for $36 plus shipping. It measures 16.5 x 32", an inch deep, and weighs about 9 pounds. Here is what it looked like when I first received it- some sanding and refinishing were definitely in order:


Day 1: Sanding
I devoted an entire evening to just sanding the tray. I had to use a coarse sandpaper on some of the rough spots, and even busted out the Dremel with a sanding drill bit to get the worst spots, like on the top where there was still a coat of gray paint. Then, I went over the whole tray with a very fine sandpaper. That was only three sentences to describe this step but trust me when I tell you that this was A LOT of work- but definitely worth the elbow grease. 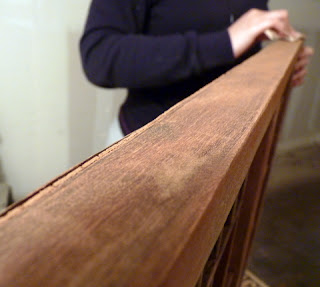 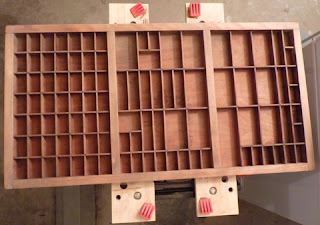 Days 2 & 3: The Back
Knowing that the front side would be difficult with all its nooks and crannies, I chose to ease myself into the task and spent the next two days working on the backside of my printer drawer. It was a two (or three) step process: wood treatment (I chose Minwax Pre-Stain Wood Conditioner) and two coats of a one-step stain & finish, Minwax PolyShades in Antique Walnut. This part was the only step of the whole process that I could say was a piece of cake. 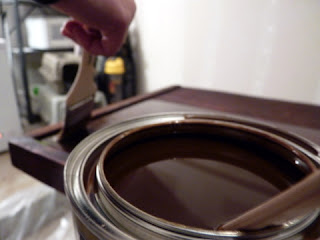 Day 4, 5 & 6: The Front
It was finally time for the front. The process was the same as the back with the wood treatment followed by stain & finish, but took about a million times longer to complete. I had to go back and sand off some of the first coat that dripped off the sides and dried a little funny before going back in with the second coat. The picture below is after the second coat- I later decided to give just the edges a third coat to give it an even richer color. 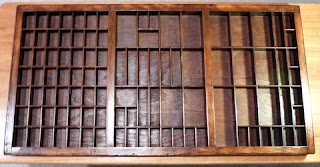 Day 7: The "AFTER"
It was finally time to add the hooks! I used eye screws in size #216. It took a quality brainstorming session to figure out how to actually attach them, but once I got there it was smooth sailing. I used my Dremel Minimite to make little holes, being careful not to go all the way through the divider, then was able to screw them right in. I chose to leave a few compartments without screws to use for post earrings and rings. This was definitely time consuming but a great job for multitasking during the Golden Globes. Go Glee! 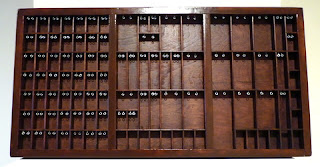 And there it is! If you are thinking about undertaking this project yourself, consider yourself warned- I only recommend doing so if you really are a do-it-yourself. Between the time and money I put into the project, it would have been a lot easier just to purchase one off Etsy (although to put the money thing into perspective, I do have plenty of booth the wood treatment and Polyshades remaining for several more of these projects). Here are some links for your further enjoyment:
I want to leave you all with this- tonight's episode of Pawn Stars on The History Channel featured a gentleman who brought in his prized collection of rare fishing lures. What were they displayed in? You got it- an antique printer tray. 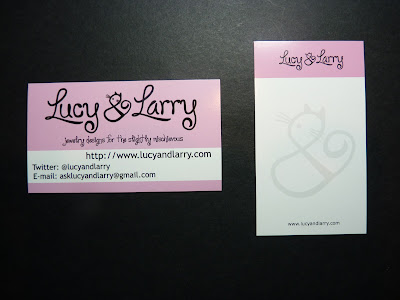 I'm one step closer to being ready to open up my shop now that my business cards and earring tags came in!  My packaging materials have arrived as well.  I designed the cards myself in Photoshop and ordered them through Uprinting.com.  It was my first time experimenting with Photoshop and am pleased with how they turned out.

I've been working on building up my inventory for my shop and hope to announce an opening date soon!
Newer Posts Older Posts Home
Subscribe to: Posts (Atom)